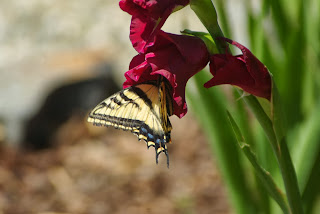 For more posts in my parable series, click here.
Posted by sittingatthefootofthemountain at 11:48 AM No comments:

The Son Also Rises--Part III of the Prodigal Sons

Our lost son, in tow of "his senses" and not anything else, is on the road again.  Perhaps life is a highway, as the song says.  But roads are, by definition, taking you somewhere...away from, or to somewhere.  Our son is heading home.  Not too long ago, it was the last place he wanted to be.  Now his heart is bruised and home doesn't look so bad.
Walking home, he has a lot of time to think.  His rumbling stomach reminds him of his poverty.  How many times does he rehearse his speech?  "I will set out and go back to my father and say to him: 'Father, I have sinned against heaven and against you. I am no longer worthy to be called your son; make me like one of your hired servants.’"  Does he think of other things to say?  Or does he speak these lines over and over, painfully aware of how much he has hurt his father?  Does he see his father's last look in his mind's eye as he walked out the door not so long ago?
The road for this son becomes a place of reflection, of revisiting where he's been as he heads home.  He is suspended between two places:  his painful past and his uncertain future, and the only present he has is the sound of his feet pounding the road.  How will he be received?
He vows to not enter his home brimming with the arrogance and privilege of sonship.  He feels his sin has demoted him--he is "no longer worthy to be called your son."  He feels he has forfeited his place the day he took the money and walked out.  He has another reckoning to consider:  his offense is also against God.
His order of his offense is correct:  "I have sinned against heaven and against you."  By denying a fundamental aspect of his faith, the commandment to "honor your father and mother, so that you may live long in the land the Lord your God is giving you" must have stung his spirit.  He had been living well--his father had provided for him and he lacked nothing.  Now, he is no better than the Gentiles in his estimation--he has dishonored God.  His spirit is defeated and ashamed.
The road is now showing him those familiar landmarks along the way...the well where the women gather, the lovely trees that sway in the afternoon breeze, the children who chase each other in a field.  He looks differently now at this countryside that had once seemed so narrow, so confining...Now it feels like, well, heaven.

“But while he was still a long way off, his father saw him and was filled with compassion for him; he ran to his son, threw his arms around him and kissed him."  Wow!  The son, head down as more guilt wells up in him, probably never even sees his father running towards him.  The son is probably repeating his speech and then feels this rush of warmth and strong arms enveloping him.  Little does he realize that each day while he was gone, his father went out to the road to scan the horizon for him.
Let's ponder this a moment.  The father never lost faith that his son would eventually return.  The first few weeks the son was gone, as painful as they were, could not dim the hope in the father's heart.  But as weeks turned into months, don't we struggle with a dimming hope?   It grows harder each day for us to face that empty road.  Yet, the father unfailingly went out.  He knew his son well enough to know that at some point, this young man's flight to "freedom" would turn into a retreat from slavery.
The father demonstrated his faith...he walked "by faith and not by sight."  He leaned heavily on the loving arms of God:  to carry his grieving heart and to protect his son.  After all, as painful as it was for him to lose his son, his son's alienation from God was all the more searing.  The father's faith in God was evinced each day as he walked out that door.
Then THE day came, and the father sees that familiar outline of a young man coming down the road.  He rushes to sweep up his haggard, thin, disheveled son with dust on his feet and the guilt--oh the guilt!--drowning his heart.  The father is "filled with compassion" and RUNS to this son.  His compassion sees through the sin and now sees an insecure and lonely young man who wanted to find his place in the world.  The father sees the "wages" the son has paid with his sinful behavior and no words are spoken.  He throws his arms around his son and kisses him.
At that breathtaking moment, the son starts his speech...he doesn't even get to finish it..."The son said to him, ‘Father, I have sinned against heaven and against you. I am no longer worthy to be called your son.’"  The bit about making him one of the father's hired men is left out...did his father's effusive response render those words rather useless or did he literally not finish the speech because his father wasted no time in telling the servants to "‘Quick! Bring the best robe and put it on him. Put a ring on his finger and sandals on his feet. Bring the fattened calf and kill it. Let’s have a feast and celebrate. For this son of mine was dead and is alive again; he was lost and is found.’ So they began to celebrate."
The father didn't want a contrite speech...the son's humble return was contrition enough.  The son had confessed his sin by his actions.  He was willing to return to his father, not claiming sonship, but a lower status of serving in the household and no longer being a  part of the family.  The son acknowledges the terrible twins of sin:  Sin hurts those love us and sears the heart of the One Who loves us without measure.
The father immediately restores the son to again being a son:  he receives a new robe, a ring and sandals.  Remember Joseph?  The Pharoah, upon showing his appreciation for Joseph's plan to save Egypt from future famine, puts him in fine linen robes.  Surely the son remembers this story.  He too, like Joseph, is being raised up to a position of honor.  The sandals on his feet reinforce this, for only servants go barefoot.  Joseph received a gold chain around his neck from the Pharoah and our son receives a ring.  Joseph was a good and caring son, and is received back into Jacob's family after many adventures.  The father is reminding his son that he has not lost his position in the family despite his adventures.
The sweet smell of a roast, the sounds of laughter and the joyful words of the father will echo into the night and soothe the heart of the returned son.  But equally, these same things will goad the other son, who refused to join the welcoming party.  The older son is out working and his head is down.  Not in repentance, but in overwhelming anger.

Next time:  Storm clouds are gathering...the other prodigal son makes his appearance 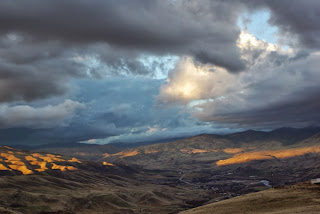 For more posts in my parable series, click here.
Posted by sittingatthefootofthemountain at 1:38 PM No comments: 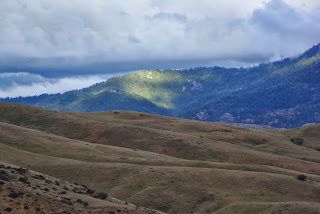 Next time:  Happy Reunion!?  Kinda Depends on Who You Talk To!

For more posts in my parable series, click here.
Posted by sittingatthefootofthemountain at 1:11 PM No comments:

The Parable of the Prodigal SONS: Part 1

So, let us begin our study of the parables with this rather famous one:

Next time:  When the money runs out (it always does)...

For more posts in my parable series, click here.
Posted by sittingatthefootofthemountain at 2:13 PM No comments: