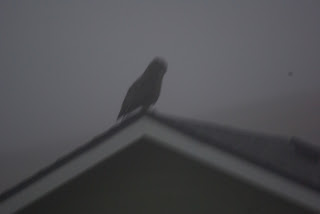 This is the only picture I have been able to take of an owl.  It was growing dark, it was foggy and as you can see, I won't be winning any awards for this shot.

Posted by sittingatthefootofthemountain at 6:32 PM No comments:

What to do While Waiting for Him

Matthew in Chapters 23-25 chronicles an interesting series of parables as we come to the end of Jesus' earthly ministry.
Jesus excoriated the Pharisees for their hypocrisy, warning the crowds and His disciples not to be like them in any way.  He mourned for Jerusalem, knowing what will befall it in the future.  His disciples, astonished that anything will come against the mighty City of David (after all, God's house is there!), asked Him to elaborate on the coming destruction and what will precede His return.
He tells them the signs to look for and how the future will be similar to Noah's time.  People will be focused on their daily lives and will ignore the warnings until this future "flood" will come and sweep them away.
Jesus subsequently starts a series of parables, underscoring the preceding discourse.  He talks of the "faithful and wise servant" who serves his master faithfully, even though the master is not around.  He contrasts this with a "wicked" servant, whose self-serving behavior betrays his supposed love for his master.
He then talks of the ten virgins.  Five are completely prepared to meet the bridegroom.  He contrasts these with the five who didn't care enough to be ready for him.
If Jesus told the crowd and His disciples not to be like the Pharisees (who are the supposed local role models for Godly living) then who should they emulate?  These parables unpack that question beautifully:  Love and serve the Master and Bridegroom out of reverence and love, and act as if each coming day will be that Day!  Don't behave out of fear and duty.
Love is the calling card of this new Kingdom.  The older Kingdom with its Temple, sacrifices, and priests will be fulfilled by a new covenant.  This will be the New Covenant of Jesus' blood.  He will enter Jerusalem as the final sacrificial Lamb.  God will be fully satisfied by what His Son will soon do.
The Temple will be demolished by the Romans in 70 AD and the Jewish people will be scattered to the four winds.  But this New Covenant will sustain and supply the Kingdom of God will everything it needs:  faithful servants of God, empowered by His very own Spirit.
The Temple of God will be these new believers, as they come to be indwelt by His Holy Spirit.  The Sacrifice will be His Son.  And the priests?  Us. 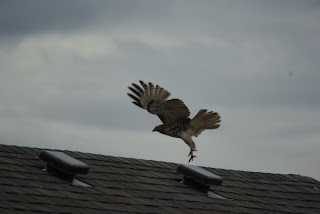 Posted by sittingatthefootofthemountain at 8:45 PM No comments: