Is Jesus Named in the Old Testament? Part IV

Another way to approach this exists.  Does Jesus' (Yeshua) appear in a representative sample?  Jesus Himself did not quote from every book of the Old Testament.  Does that somehow diminish His involvement with it?  No.

Let's explore a Jewish concept for a moment about how they see their sacred scriptures.  They refer to the Old Testament as the Tanakh.  It is an acronym that stands for all the books of their Bible.  Here's how beaks down:

So, if you quote from each section, but not necessarily every book, you are still standing on His word in its completeness.  Jesus quoted from each division.  His name also shows up in each division.

Now, we will explore the name in the Neviim, in the Prophets, and yes, there are many uses of the name in this division of the Old Testament.  The  greatest number is found in Isaiah, who lavishes many verses on "the servant of the LORD."  So, you would expect to find yeshuaw'ah mentioned many times in Isaiah, and you do.

2 Samuel 22:3 says, "The God of my rock; in him will I trust; he is my shield, and the horn of my salvation (yesha' ), my high tower, and my refuge, my saviour; thou savest me from violence."  This scripture comes from a song that David sang, "when the LORD delivered him from the hand of all his enemies and from the hand of Saul."  (2 Sam. 22:1)

We should expect David, who is the king that prefigures the Messiah, would use the Messiah's name in his victory song.  A beautiful symmetry exists here in his song.  When he begins, he starts with this verse.  When he completes the song, he ends with this verse:  "He is the tower of salvation (yeshuw'ah) for his king: and he shewth mercy to his anointed, unto David, and to his seed for evermore."  (22:51).

Do you see it?  David begins his song with the Hebrew word for salvation (yesha' ) that means "salvation, safety, saving." (Strong's)  He ends his song with the word for salvation (yeshuw'ah) that means "salvation, help, deliverance, health, save, saving, welfare." (Strong's) The second word he uses seems to carry a deeper meaning.  According to the "Outline of Biblical Usage" in Strong's, this word yeshuw'ah carries the definition of salvation "by God."

David's name means "Beloved" in Hebrew.  He is a king beloved by God, delivered by God and sustained by God.  Now, fast forward to a river and two men standing in the slow current.  One man, reluctant but obedient, gently lowers another Man into the river.  With water streaming down His face,  this Man hears a voice that says, "This is my beloved Son, in whom I am well pleased." (Matt. 3:17)

Later, this Man will characterized by Isaiah's description of God's servant.  The context is the same for this Man as it was for David:  "But the Pharisees went out and plotted how they might kill Jesus."  (Matt. 12:14)  He is facing His enemies.  Having healed a man's withered hand on the Sabbath, Jesus knows His enemies are going to kill Him, and He withdraws:

"Aware of this, Jesus withdrew from that place. A large crowd followed him, and he healed all who were ill. He warned them not to tell others about him. This was to fulfill what was spoken through the prophet Isaiah:
'Here is my servant whom I have chosen,
the one I love, in whom I delight;
I will put my Spirit on him,
and he will proclaim justice to the nations.
He will not quarrel or cry out;
no one will hear his voice in the streets.
A bruised reed he will not break,
and a smoldering wick he will not snuff out,
till he has brought justice through to victory.
In his name the nations will put their hope.'” (Matt. 12:15-21)

The interweaving of the Old and New Testaments is breathtaking.  The Old speaks of yeshuw'ah and David; the New speaks of Yeshua and Beloved.

David was delivered from his enemies, and speaks of a deeper deliverance from evil, brought from God's mercy on His anointed king and on his descendants.

Jesus delivers us from the ultimate enemy:  sin and death.  He deeply delivers us because of God's mercy shown through the life and death of His Beloved Son, and we are His descendants, His children.

"Blessed be the God and Father of our Lord Jesus Christ, who has blessed us with every spiritual blessing in the heavenly places in Christ, just as He chose us in Him before the foundation of the world, that we should be holy and without blame before Him in love, having predestined us to adoption as sons by Jesus Christ to Himself, according to the good pleasure of His will, to the praise of the glory of His grace, by which He made us accepted in the Beloved." (Eph. 1:3-6)

"What if God, wanting to show His wrath and to make His power known, endured with much longsuffering the vessels of wrath prepared for destruction, and that He might make known the riches of His glory on the vessels of mercy, which He had prepared beforehand for glory, even us whom He called, not of the Jews only, but also of the Gentiles?
As He says also in Hosea:

'I will call them My people, who were not My people,
And her beloved, who was not beloved.
And it shall come to pass in the place where it was said to them,
"You are not My people,"
There they shall be called sons of the living God.'” (Romans 9:22-26)

Deliverance. Safety. Salvation. All are contained in the Hebrew word and later name of yeshuaw'ah/Yeshua.

Finally, the third scripture we find yeshuw'ah in the Neviim is 2 Chronicles 20:17: "You will not need to fight in this battle. Position yourselves, stand still and see the salvation (yeshuw'ah) of the Lord, who is with you, O Judah and Jerusalem! Do not fear or be dismayed; tomorrow go out against them, for the Lord is with you.”
Wow.  These were spoken by a man, Jahaziel, who was anointed with God's Spirit.  He is speaking to King Jehoshaphat and his people.

Fast forward again to a Man, anointed with God's Spirit and speaking to us as we face our world.  We too have seen God's salvation--His Son--and we can move out into the world, knowing that He is with us.  We need not fight.  We are positioned in His Son. 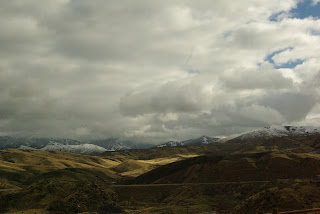 Posted by sittingatthefootofthemountain at 5:28 PM No comments: