From Chaos to Christ! Part I

The heavens declare the glory of God;
the skies proclaim the work of his hands.
2 Day after day they pour forth speech;
night after night they reveal knowledge.
3 They have no speech, they use no words;
no sound is heard from them.
4 Yet their voice goes out into all the earth,
their words to the ends of the world.

What are the stars telling us?  They are telling us, along with all of creation, that our God is the God of order, and is actively involved in reversing what sin brought to the planet.


What is the news telling us? Disorder and chaos are everywhere. It is what it is.


Who is right? The creation or CNN? Do you fear what you see, or do you stand on what is promised?

Let's go back to being an ancient people, staring out into the world around us. Is the order that we see permanent? Subject to change? Will sooner or later disappear?


Last night, we had a harvest moon and lunar eclipse. The night before, the full moon was so bright, it lit up the night with a lovely silver light. Last night, however, it was shrouded in darkness, with a deep russet hue. It was a scary contrast from the night before. (But I am a child of the Enlightenment and science; I know why the moon did what it did.) But, thousands of years ago, I would have trembled under such a moon.

Ancient people feared chaos. To the Greeks, for example, Chaos was the first thing that existed; darkness (“Erebus”) and night (“Nyx”) came from Chaos. One philosopher claimed that chaos was a “shapeless heap” and all the elements were thrown together in a formless mass.

In ancient times, chaos led to disorder, which led to death. Pure and simple.  This dark water is a nightmare for ancient people—if things started out that way, they can revert very easily...right?


Let's look at this key element, the water over which God hovers. Genesis was written by a man of the desert, Moses. It was read by a people of the desert: the children of Israel. Water to desert people (Canaan, Mesopotamia and Egypt) was a symbol of chaos as well as order. If it was controlled--irrigation--it provided a life-sustaining force. If it went out of control--flooding--it meant destruction and death.

God hovers above the water: He is above chaos; He is not in it or controlled by it. He is over it. Later on, Jesus walking on the water is no coincidence. He is walking over chaos.


What does God do? He imposes order on the chaos: "In the beginning God created the heavens and the earth. 2 Now the earth was formless and empty, darkness was over the surface of the deep, and the Spirit of God was hovering over the waters. 3 And God said, 'Let there be light,' and there was light. 4 God saw that the light was good, and he separated the light from the darkness. 5 God called the light 'day,' and the darkness he called 'night.'" God makes light triumph over the dark.


Next, "And God said, 'Let there be a vault between the waters to separate water from water.' 7 So God made the vault and separated the water under the vault from the water above it. And it was so. 8 God called the vault 'sky.'” God separates and thus controls the waters above. The sky will not fall, even in the most violent of rainstorms. Water is given a place under His hand.


Next, "And God said, 'Let the water under the sky be gathered to one place, and let dry ground appear.' And it was so. 10 God called the dry ground 'land,' and the gathered waters he called 'seas.' And God saw that it was good." God separates and thus controls the waters below. Ground is assured of not forever disappearing back under the waters.


Next, "And God said, Let the water teem with living creatures, and let birds fly above the earth across the vault of the sky.' 21 So God created the great creatures of the sea and every living thing with which the water teems and that moves about in it, according to their kinds, and every winged bird according to its kind. And God saw that it was good. 22 God blessed them and said, 'Be fruitful and increase in number and fill the water in the seas, and let the birds increase on the earth.'” Reproduction means abundance in perpetuity. Emptiness is not the norm; abundance is.


Next, "Then God said, 'Let us make mankind in our image, in our likeness, so that they may rule over the fish in the sea and the birds in the sky, over the livestock and all the wild animals, and over all the creatures that move along the ground.'” We govern the animals; we are a partner in God’s order.


Next, "So God created mankind in his own image, in the image of God he created them; male and female he created them." We reflect Him and thus His order: we are the very embodiment of His orderly design.


Next, "God blessed them and said to them, 'Be fruitful and increase in number; fill the earth and subdue it. Rule over the fish in the sea and the birds in the sky and over every living creature that moves on the ground.'” Reproduction provides continuity and order. We are designed to continue on; children represent this aspect of the divine order.


Next, "Then God said, 'I give you every seed-bearing plant on the face of the whole earth and every tree that has fruit with seed in it. They will be yours for food. 30 And to all the beasts of the earth and all the birds in the sky and all the creatures that move along the ground—everything that has the breath of life in it—I give every green plant for food.'” He assures food is available, because in an orderly system, all are provided for, whether animals or humans. Sustenance is not an accident or at the caprice of a impersonal system; it is in His design.

Next, "God saw all that he had made, and it was very good."


Good is equal to order, and order is equal to good. Chaos is banished. There is now form, fullness and light—the exact opposite of what God was originally hovering over. 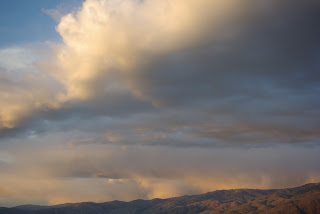 Next time, "Where Four Rivers Meet" From Chaos to Christ, Part II

Posted by sittingatthefootofthemountain at 12:46 PM No comments:

Interestingly enough, only Mark (4:26-29) records this parable.  Here it is:
"He also said, 'This is what the kingdom of God is like. A man scatters seed on the ground. Night and day, whether he sleeps or gets up, the seed sprouts and grows, though he does not know how. All by itself the soil produces grain—first the stalk, then the head, then the full kernel in the head. As soon as the grain is ripe, he puts the sickle to it, because the harvest has come.'”
Jesus compared Himself to a grain of wheat: "And Jesus answered them, saying, 'The hour has come for the Son of Man to be glorified. Truly, truly, I say to you, unless a grain of wheat falls into the earth and dies, it remains alone; but if it dies, it bears much fruit. He who loves his life loses it, and he who hates his life in this world will keep it to life eternal'" (John 12:24)
Jesus sees the potential that is contained in a seed.  He knows of its amazing hidden power to grow beyond itself.  Jesus' death, like a seed, contained the hidden power of the Resurrection, which would not be made evident until Jesus was put in the earth.
The Kingdom of God is no different.  It must be planted and then its amazing power will be released.
You open an apple, and in its heart, in its center, is a group of seeds.  Small and black, they look nothing like an apple or an apple tree.  They certainly do not look like an orchard.  So, in effect, it takes faith to take these seeds outside and plant them in the ground.  Why faith?  Because they look nothing like what they contain.  They show no power.  They show no growth.  They are merely a handful of black seeds in the palm of your hand.  For now.
That's where this parable tells of Jesus and His Kingdom.  "A man scatters seed on the ground."  The man is the Man.
Jesus came to earth with nothing to recommend Him.  He was poor and from the boondocks.  Philip was so excited about this Man, Jesus, but look at Nathanael's reaction:  "Philip found Nathanael and said to him, 'We have found Him of whom Moses in the Law and also the Prophets wrote-- Jesus of Nazareth, the son of Joseph.' Nathanael said to him, 'Can any good thing come out of Nazareth?' Philip said to him, 'Come and see.'" (John 1:45-6)
Jesus scatters the message of the Kingdom on the ground:  the soil of His followers.  No matter what Jesus was doing, the seeds--the message of hope that His death and resurrection will inaugurate--took root.  The seeds grew because Jesus was all too aware of the power contained in the message.
Why?  The message was of His Father, the Almighty God:  "For I did not speak on My own initiative, but the Father Himself who sent Me has given Me a commandment as to what to say and what to speak. I know that His commandment is eternal life; therefore the things I speak, I speak just as the Father has told Me." (John 12:49-50)  The words, the message, the seeds:  the power contained therein is of God Himself.
Seeds grow and produce a harvest.  Jesus' ministry grew and produced a harvest.  But even more so, His death and resurrection released a power that now we as believers possess: "And if the Spirit of him who raised Jesus from the dead is living in you, he who raised Christ from the dead will also give life to your mortal bodies because of his Spirit who lives in you." (Rom. 8:11)
Did you catch that?  We have the same power living in us that raised Jesus from the dead!  Whoa!  Now that's good news!  You may see yourself as a wee seed.  God sees you as a field of waving grain, able to feed many.  How so?  The same Power that raised Jesus--the Father in heaven--raises you to new life and His abundance.
You see a seed.  He sees an orchard.
You see a seed packet in the garden section of the store.  He sees a beautiful garden.
You see a pine cone.  He sees a forest.
You see yourself as one insignificant person. He sees His child, set to work by His power and His message of love.
See yourself as He sees you, and in the power of His Son, get growing! 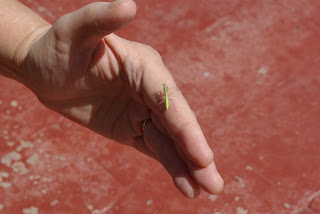 
Posted by sittingatthefootofthemountain at 5:09 PM No comments: