We are exploring Jesus in the Old Testament. I posted in an earlier blog that Jesus' presence is found in the Ark of Covenant.  I would like to explore this idea a bit further. Specifically, I would like to look at the covering or lid of the Ark.  In Exodus 26:34, we read: "Then put the Ark’s cover—the place of atonement—on top of the Ark of the Covenant inside the Most Holy Place."

Jesus constantly referred to Himself as the Light. Interesting.

The cover of the Ark was pure gold, and was to be the very dwelling place where God met His people. Remember what was in the Ark? Manna, Aaron's rod and the Ten Commandments. Yet, all are covered by this gold lid. You might expect to see them displayed to the people or set alongside the bread and the lampstand. But they are covered. Why?

Without Jesus, none of this makes sense.  But if He is the Light, then expect illumination!

You would want to proudly display the Ten Commandments, written by the very finger of God upon stone. This permanent material shows the everlasting nature of this covenant. The Law provides the very basis of your existence, and thereby grants you an identity: you are the chosen ones, living in a convenantal relationship with the Almighty King of the Universe. You would want it proudly visible, reminding you and everyone else of this special relationship.

You would want to display Aaron's rod, with its bud, to show that Aaron's priesthood is superior to all others. It budded miraculously, and has stayed budded. The staff he carried was not a dead piece of wood. It budded as if it were still wedded to the tree. Why wouldn't you want everyone to see how your priest is chosen and his staff is a sign of that favor?

You would want that manna out where everyone could see it. Remember how any extra gathered manna would rot? You weren't allowed to store it and yet, look at that! It sits in a jar, perpetually fresh. You could point to the jar and comment how God fed you and your people with bread from His very own hand.

Yet, into a box they go, and they have a lid over them. Out of sight. Nothing to brag on or point out. Covered. Now, admittedly, the gold cover is beautiful, with its cherubim adorning the top. But the ark is behind a curtain, and only one person, once a year, could go in. He sprinkled blood over the cover or Mercy Seat on Yom Kippur, the Day of Atonement, for himself and for the people.

The Ark was not a show piece, nor its contents.

Did that bother the people? Did they desire to show something off, akin to the ostentatious displays of the Egyptians?

What if you dared to look into the Ark? 1 Samuel 6:19 shows us: "But God struck down some of the inhabitants of Beth Shemesh, putting seventy of them to death because they looked into the ark of the LORD. The people mourned because of the heavy blow the LORD had dealt them."

So, how does Jesus illuminate the Ark and its rather odd (humanly speaking) treatment of its contents?

The contents under the lid had to be covered. Why? Without a covering, the contents are powerless in and of themselves. The blood, sprinkled over the lid once a year, illustrates the need for cleansing the people from sin. That is first and foremost.

But, those objects within the ark speak of a time to come when The Blood will bring life to the contents contained within. How so?

Hebrews 10:1-4 says, "The old system under the law of Moses was only a shadow, a dim preview of the good things to come, not the good things themselves. The sacrifices under that system were repeated again and again, year after year, but they were never able to provide perfect cleansing for those who came to worship. If they could have provided perfect cleansing, the sacrifices would have stopped, for the worshipers would have been purified once for all time, and their feelings of guilt would have disappeared. But instead, those sacrifices actually reminded them of their sins year after year. For it is not possible for the blood of bulls and goats to take away sins."

So, the annual covering of blood upon the Mercy Seat of the Ark was pointing to the One to come, Who would impart life through His own blood.

Let's start with the tablets inscribed with the Ten Commandments.

Without the Law having a covering of blood, it stands starkly, condemning all we do.

Paul says of the Law in Romans 7:21-23: 21, "I have discovered this principle of life—that when I want to do what is right, I inevitably do what is wrong. I love God’s law with all my heart. But there is another power within me that is at war with my mind. This power makes me a slave to the sin that is still within me."

What is the answer to the Law with its standard of righteousness and our sinful nature?

Paul says in Romans 7:24-5 and into 8:1-4: "Oh, what a miserable person I am! Who will free me from this life that is dominated by sin and death? Thank God! The answer is in Jesus Christ our Lord. So you see how it is: In my mind I really want to obey God’s law, but because of my sinful nature I am a slave to sin....So now there is no condemnation for those who belong to Christ Jesus. And because you belong to him, the power of the life-giving Spirit has freed you from the power of sin that leads to death. The law of Moses was unable to save us because of the weakness of our sinful nature. So God did what the law could not do. He sent his own Son in a body like the bodies we sinners have. And in that body God declared an end to sin’s control over us by giving his Son as a sacrifice for our sins. He did this so that the just requirement of the law would be fully satisfied for us, who no longer follow our sinful nature but instead follow the Spirit."

The Law needed the covering of the blood, for people had to be cleansed each year. But that very blood points to Jesus.

Now, within us (like the contents being kept inside the box) this Law is transformed into a new law: the Law of the Spirit. This law doesn't negate the older Law. Our sinful nature, made into a new nature with the blood of the Lamb, now wants to do righteous things that God asks of us.

How about the budded rod? How does something dead, like a severed branch, have life in it? It needs sap to reanimate it. It is subject to the covering of blood on the Mercy Seat each year, and yet it points to The Blood to come. This Blood becomes our very life, as Jesus says in John 15:5: "Yes, I am the vine; you are the branches. Those who remain in me, and I in them, will produce much fruit. For apart from me you can do nothing."

We produce buds and then fruit: "But if you remain in me and my words remain in you, you may ask for anything you want, and it will be granted! When you produce much fruit, you are my true disciples. This brings great glory to my Father." (John 15:7 & 8)

Aaron and his priesthood needed a covering in order to conduct their appointed office. But a greater Priest will come and be the covering itself.

Then there's the manna. It provided life to those in the desert. The manna tells of His very life in John 6:53-8: "So Jesus said again, 'I tell you the truth, unless you eat the flesh of the Son of Man and drink his blood, you cannot have eternal life within you. But anyone who eats my flesh and drinks my blood has eternal life, and I will raise that person at the last day. For my flesh is true food, and my blood is true drink. Anyone who eats my flesh and drinks my blood remains in me, and I in him. I live because of the living Father who sent me; in the same way, anyone who feeds on me will live because of me. I am the true bread that came down from heaven. Anyone who eats this bread will not die as your ancestors did (even though they ate the manna) but will live forever.'"

The manna needed a covering year after year--it was food that would only temporarily satisfy a person. But One was coming whose very flesh would satisfy forever our deepest hunger.

Jesus Himself provided the blood and is Himself the Mercy Seat--the ultimate covering--for He covers us, makes us righteousness, provides us with His own life within us and nourishes us: "For God presented Jesus as the sacrifice for sin. People are made right with God when they believe that Jesus sacrificed his life, shedding his blood. This sacrifice shows that God was being fair when he held back and did not punish those who sinned in times past, 26 for he was looking ahead and including them in what he would do in this present time. God did this to demonstrate his righteousness, for he himself is fair and just, and he makes sinners right in his sight when they believe in Jesus." (Romans 3:25-27)

Jesus accomplished this as our High Priest:  "Under the old system, the blood of goats and bulls and the ashes of a heifer could cleanse people’s bodies from ceremonial impurity. Just think how much more the blood of Christ will purify our consciences from sinful deeds so that we can worship the living God. For by the power of the eternal Spirit, Christ offered himself to God as a perfect sacrifice for our sins. That is why he is the one who mediates a new covenant between God and people, so that all who are called can receive the eternal inheritance God has promised them. For Christ died to set them free from the penalty of the sins they had committed under that first covenant."  (Hebrews 9:13-15)

Hebrews 1:3 proclaims: "The Son radiates God’s own glory and expresses the very character of God, and he sustains everything by the mighty power of his command. When he had cleansed us from our sins, he sat down in the place of honor at the right hand of the majestic God in heaven."

No need to be a raider of the lost Ark. It disappeared for a reason. Its job was done. It pointed the way to the One to come.

Jesus became The Mercy Seat for us to encounter God. Now that the curtain is torn, and with His light flooding in, we can "come boldly to the throne of our gracious God. There we will receive his mercy, and we will find grace to help us when we need it most." (Hebrews 4:16-17).

Now it all makes sense. 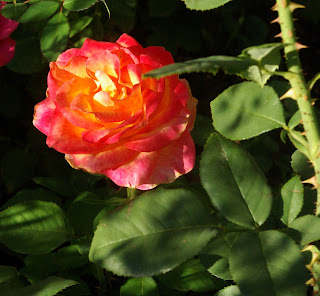 Posted by sittingatthefootofthemountain at 12:20 PM