Interesting. We need to give the religious leaders credit for their insight.  But intellectual prowess is not what the Kingdom of God is built upon.  It is built upon Jesus and His work.  Jesus immediately takes their response and focuses the discussion back to its origin:  by what authority does Jesus do what He is doing?
He responds:  “Have you never read in the Scriptures: 'The stone the builders rejected has become the cornerstone; the Lord has done this, and it is marvelous in our eyes’?  Therefore I tell you that the kingdom of God will be taken away from you and given to a people who will produce its fruit. Anyone who falls on this stone will be broken to pieces; anyone on whom it falls will be crushed.”
In other words, the very ones who should know the Christ, because of their vast knowledge of the Word of God, are the very ones who have missed the Son.  Sad, but so true:  knowledge is not enough.  A sincere heart that seeks God earnestly is what He rewards.
Now, at this point, the leaders could have engaged in a conversation to pursue truth and see what this Jesus was all about.  But, if you are sincere about the truth, you have to be willing to pursue it to where it leads.  The truth sought by a seeking heart will lead to Jesus, His work and His divinely appointed authority.
The leaders' reaction illustrates their hearts:  "When the chief priests and the Pharisees heard Jesus’ parables, they knew he was talking about them. They looked for a way to arrest him, but they were afraid of the crowd because the people held that he was a prophet."
Whoa.  They were not interested in pursuing whether or not Jesus' claims were true.  They weren't interested in the Kingdom of God.  They wanted him out of the way.  Period.  They wanted to arrest Him and whisk Him off to some jail, where He would languish and not be heard from ever again.
But the parable speaks a deeper truth:  Jesus is claiming to be God's Son.  How do the tenants react to the landowner's son?  Death.
The leaders' hearts will continue to harden to the point where they will ask the Romans for the death of the Son.  The end of Jesus' earthy ministry was coming, and sadly these leaders will, out of jealousy and hatred, be involved in ending it.
But, the Good News is:  Fruit will come.  The Kingdom of God will come.  Salvation in His name will come.
The Bad News:  The very Temple that the leaders so cherish will be torn down stone by stone by the Romans who earlier had helped the leaders destroy Jesus.   The Romans will turn on the Jews and many of them will be thrown to their deaths from the Temple ramparts in 70 AD.
The Kingdom of God is built on His Son as the foundation, with His sacrifice to be the cornerstone.  The vineyard will have new tenants whose hearts will open to truth, to the Truth. 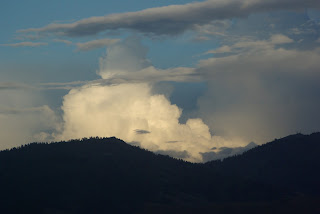 Posted by sittingatthefootofthemountain at 8:51 AM